Tain’t what you do

but the way that you do it.

as neutrals have been popular for a long time

and their trend has peaked

and maybe lavender is now where it’s at

but good design is not dependant upon any particular color

I gotta be me.

Greys were the star for many years,

while beige has been unloved, though that is now changing,

but my heart is open to all neutrals, all the time–

their whole spectrum enthrals me.

Like a mother awed by the endless potential in each of her children.

So, what began as a brief musing on neutrals

a lapse between posting and finally, the decision to

give passion its due and take this subject on as a series. 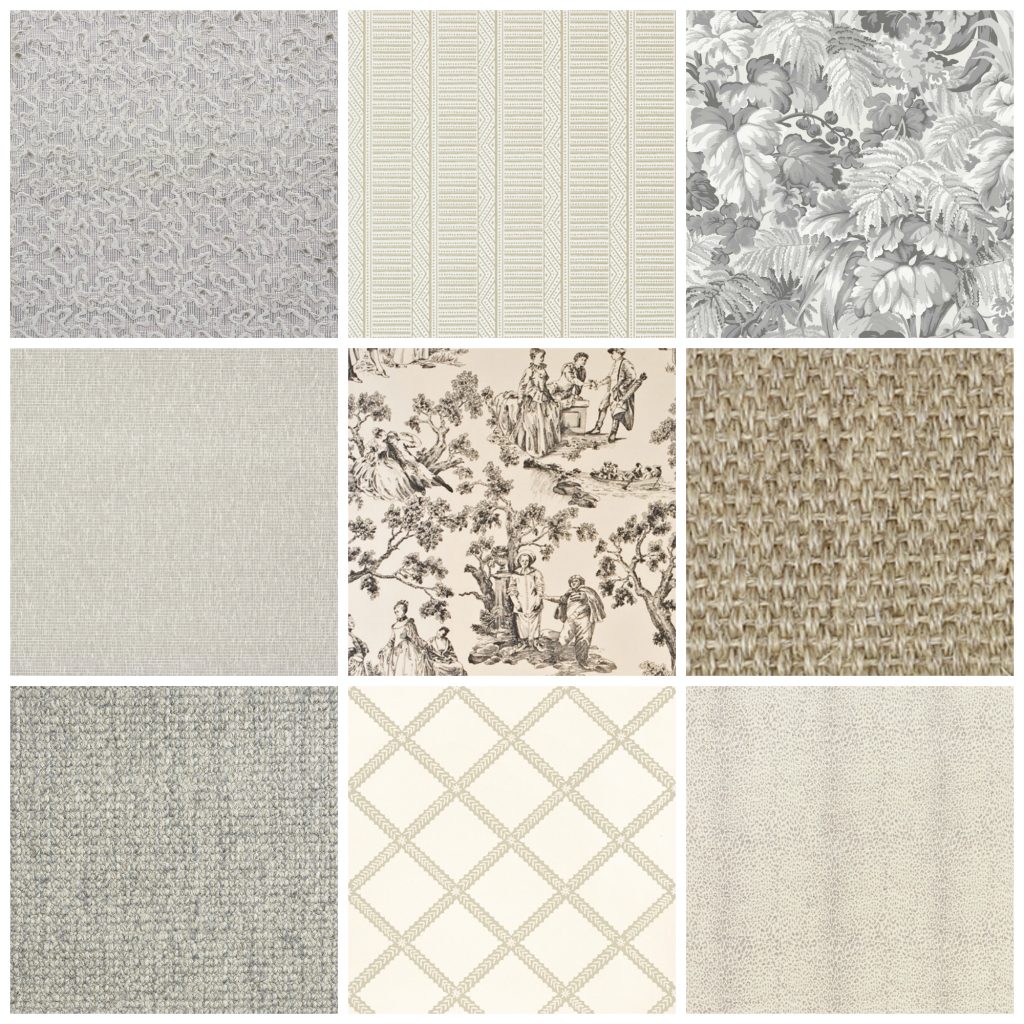 A collage of pretty neutrals

I’m doing this for my own understanding

this will refresh, revive, and rekindle your passion for neutrals, as well,

thereby elevating all of us to the level of super neural, neutral designers.

This will cover the basics.

The next post will be about using neutrals in interiors,

and what comes after that, we shall see.

When I want to get a grip on a subject, I go elementary;

with basics in hand I have a framework for the details when I go deeper.

Consider the above a warning that the rest of this post is going to be at grade school level.

The first thing I want to talk about is neutrals’ relative

(To keep things simple, all paint colors are Benjamin Moore.)

and if its really light, 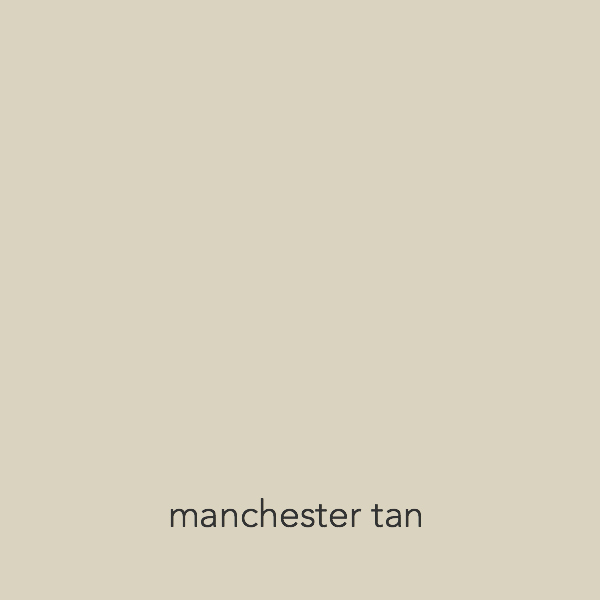 A cool neutral is grey. Not so many other names for grey.

Coventry is a grey that pops up often on “best grey” lists. 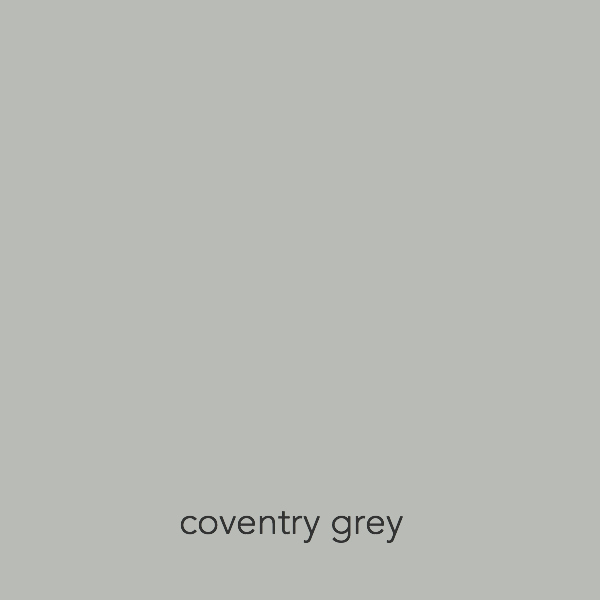 But there are cool beiges. 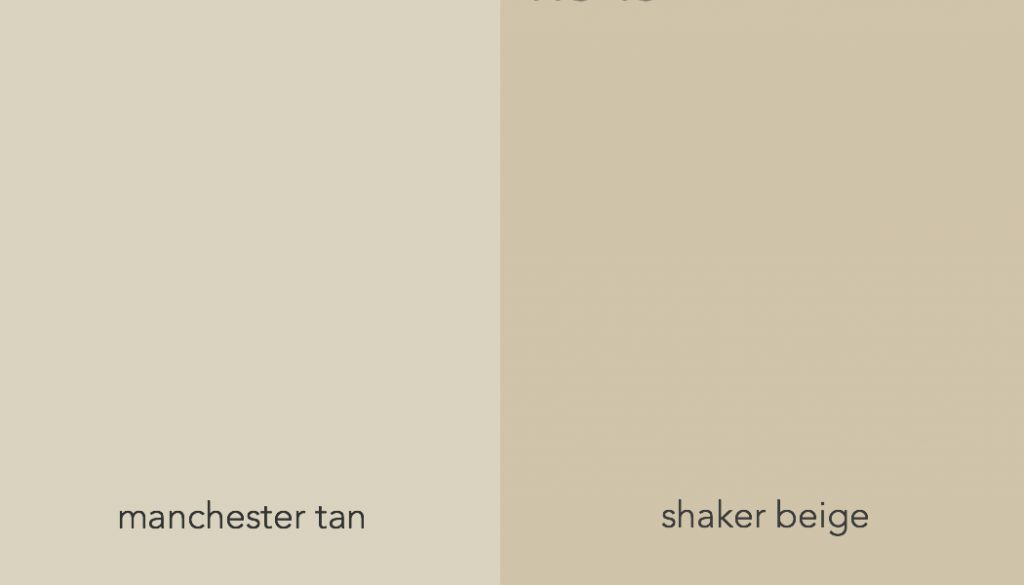 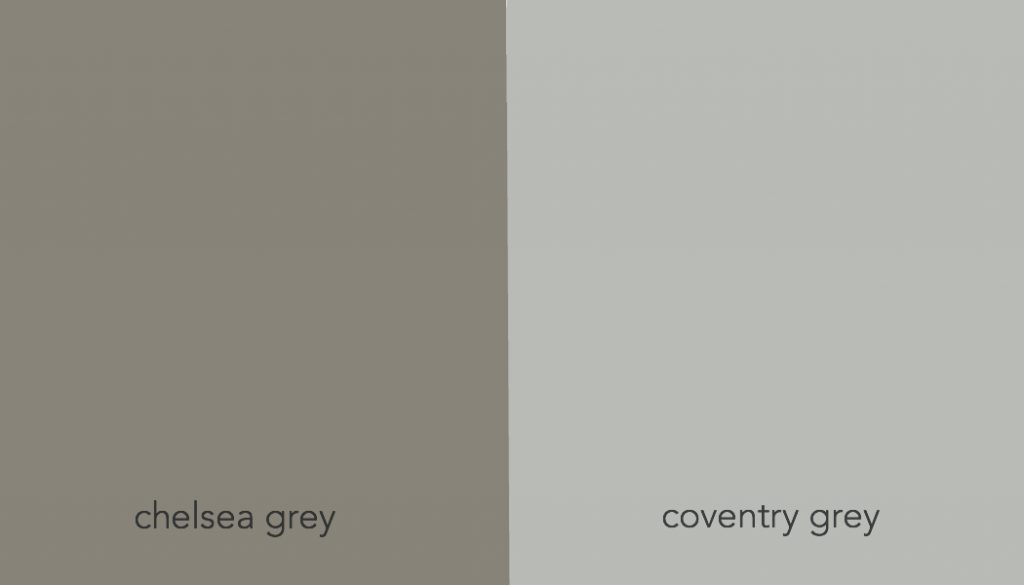 Then there are those neutrals that we can’t quite put our finger on…..

they look cool next to beige but warm next to grey.

These are usually called greige.

Revere Pewter is a popular greige. 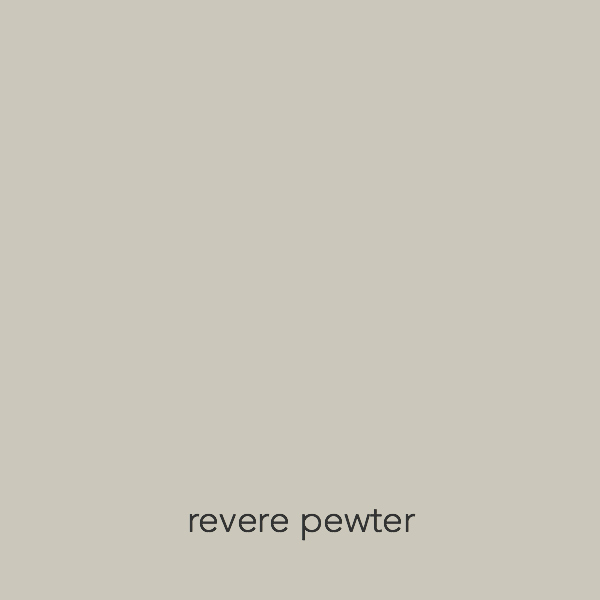 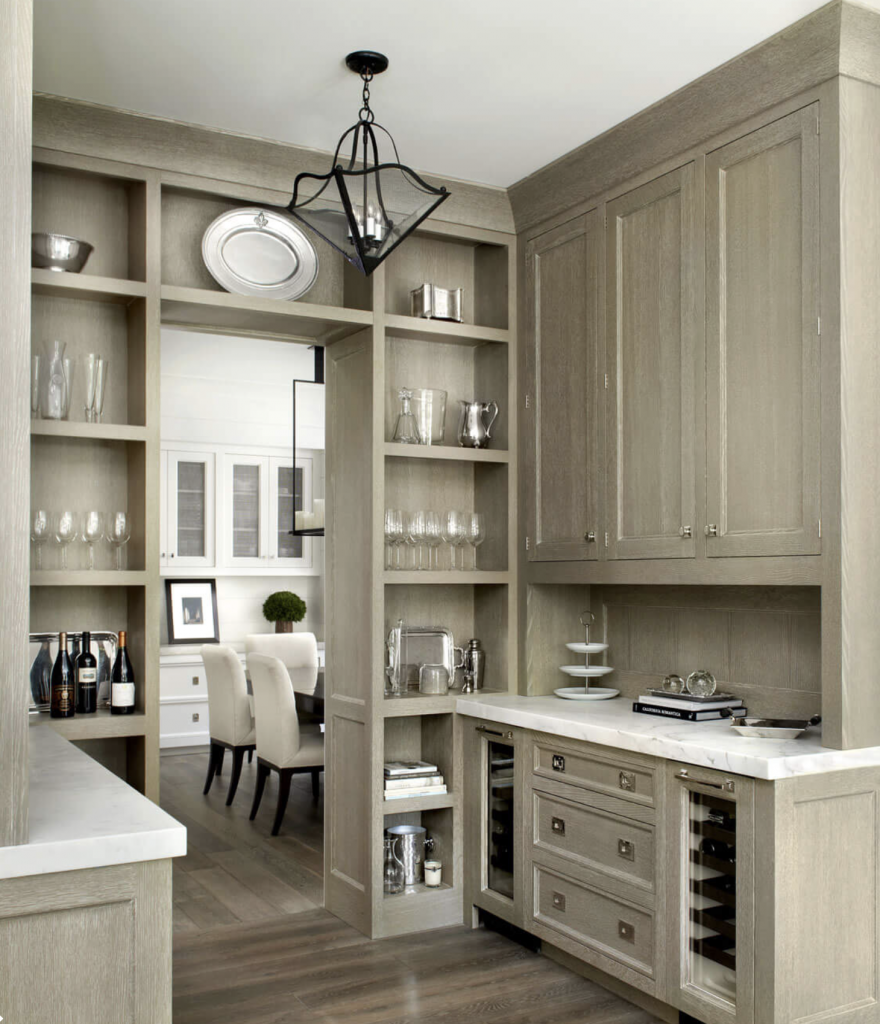 A beautiful pantry in greige by O’BRIENHARRIS

Just as with grey and beige,

greige can also be relatively warm or cool.

Besides being lighter, Balboa Mist looks cool next to the Revere Pewter. 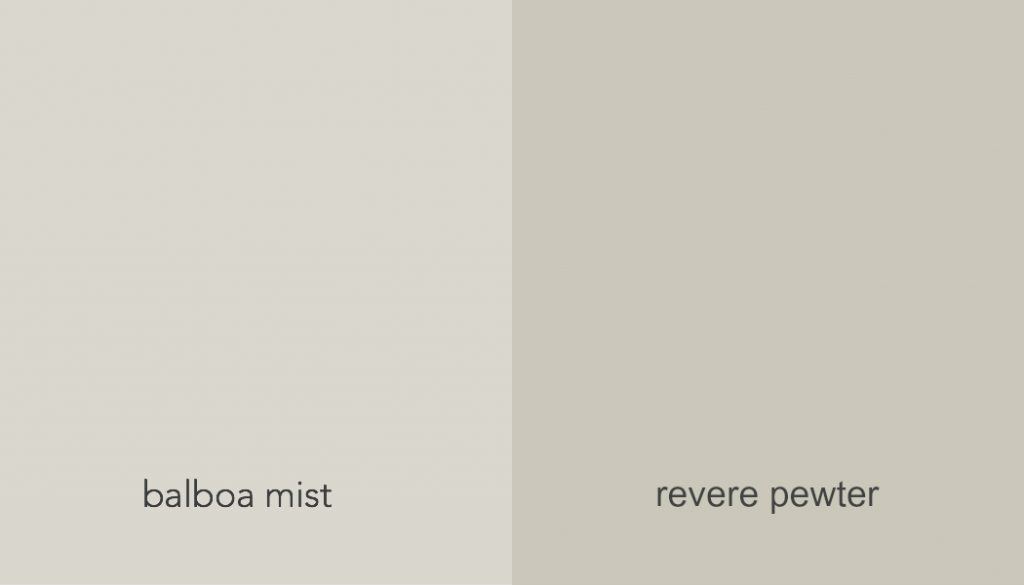 And Revere Pewter looks cool next to Stone Hearth. 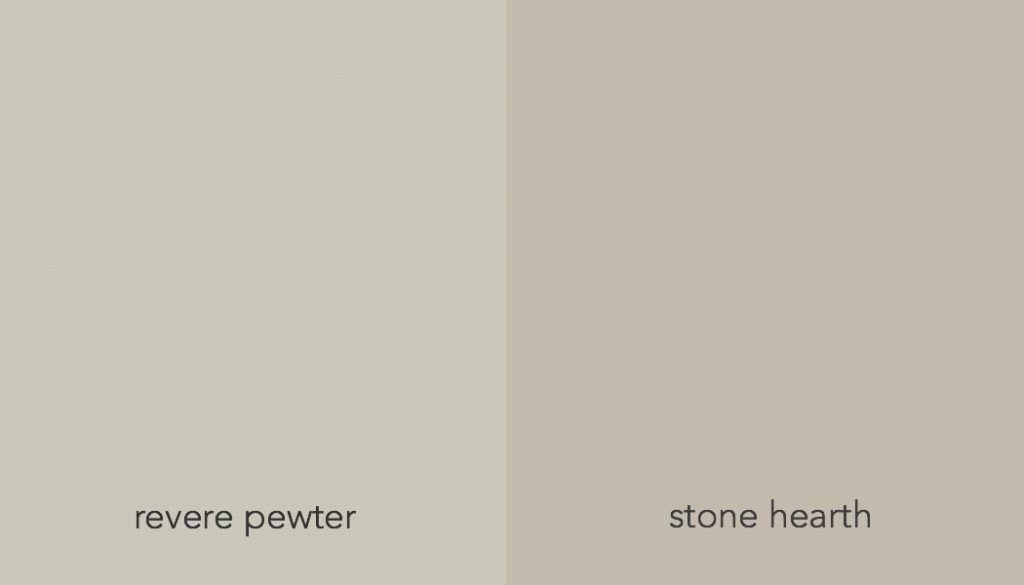 But greige will usually ( always?) look warm next to grey 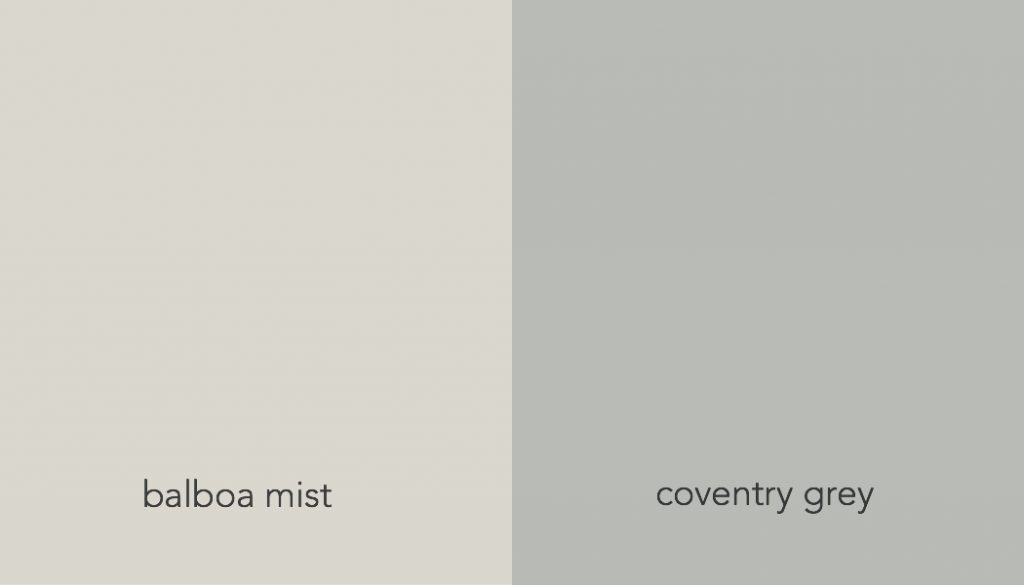 and cool next to beige.

This change in appearance,

depending upon what color any other color is next to,

is due to an effect called simultaneous contrast,

who wrote a book on it called

“The Principle of Harmony and Contrast of Colors,” in 1839.

Just so you know.

Is one neutral better than the other ?

Some say greige is more sophisticated than beige but it really depends on how it is used. 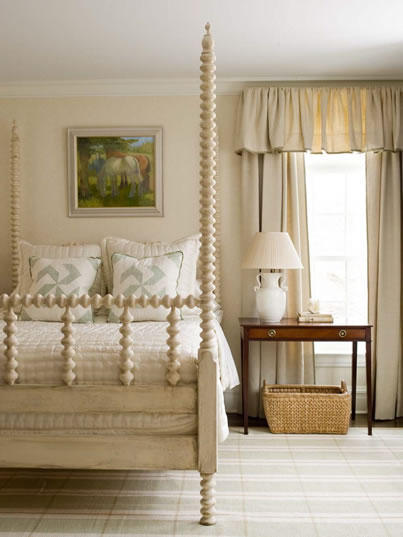 Serene, sophisticated and homey, thanks to the four-poster, spindle bed, plaid rug and flounced valance.

Jean Louis Denoit uses tons of grey and his interiors are paradigms of  sophistication. 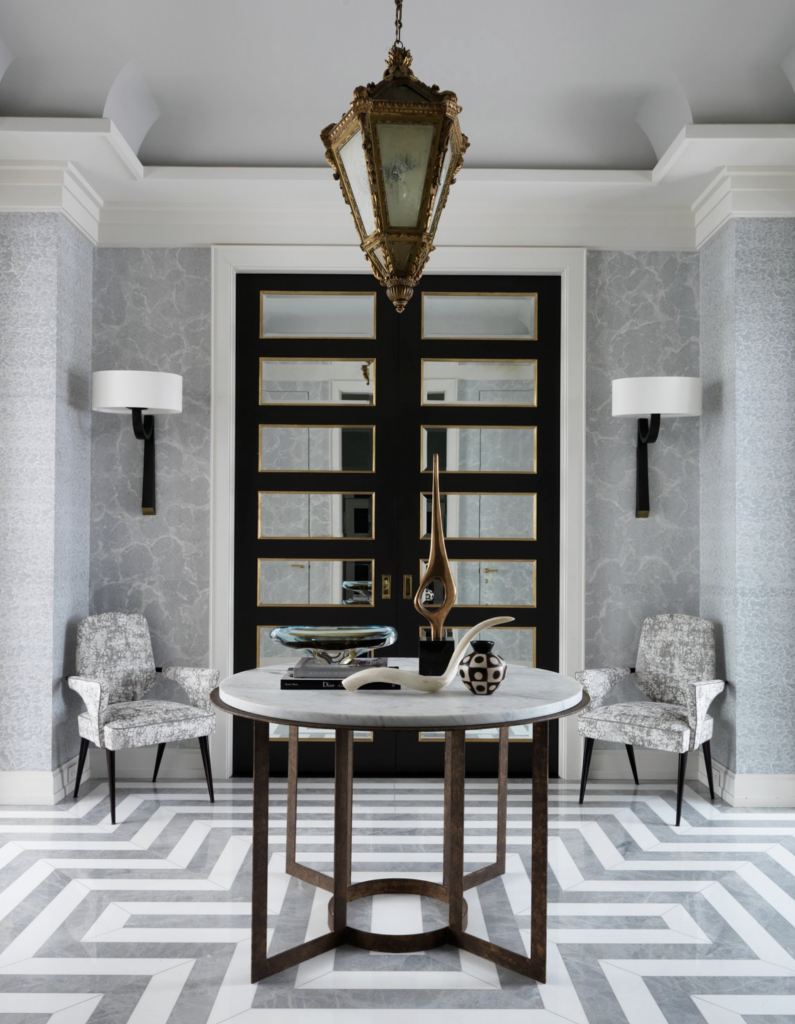 So, as the song goes,

If you click that it will take you to Ella Fitzgerald, but please don’t do that ’til you finish reading.

The next quality of neutrals is

Sometimes referred to as Value.

We all recognise what’s light and what’s dark. 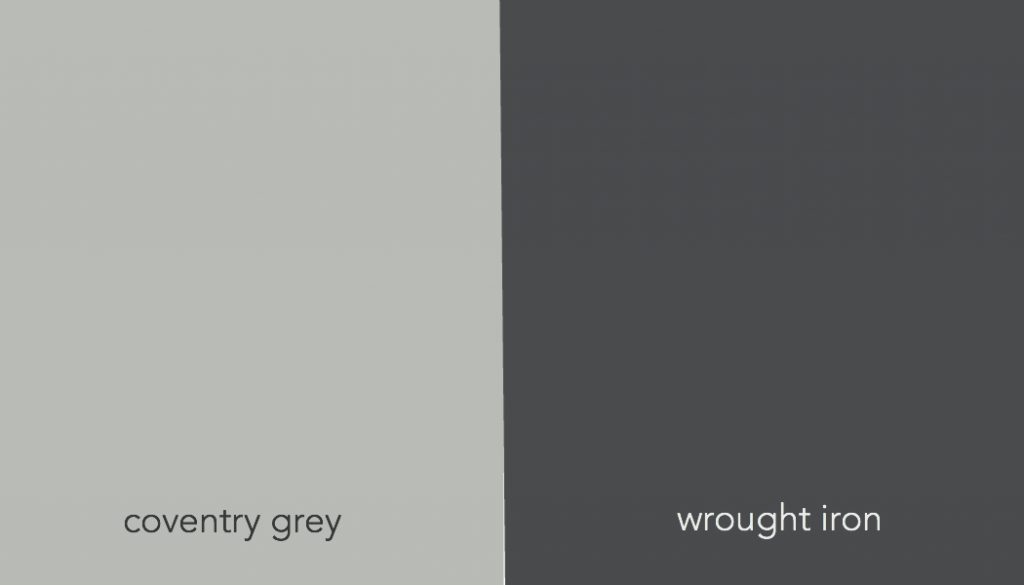 Where it gets interesting is that

something light, seen in isolation, 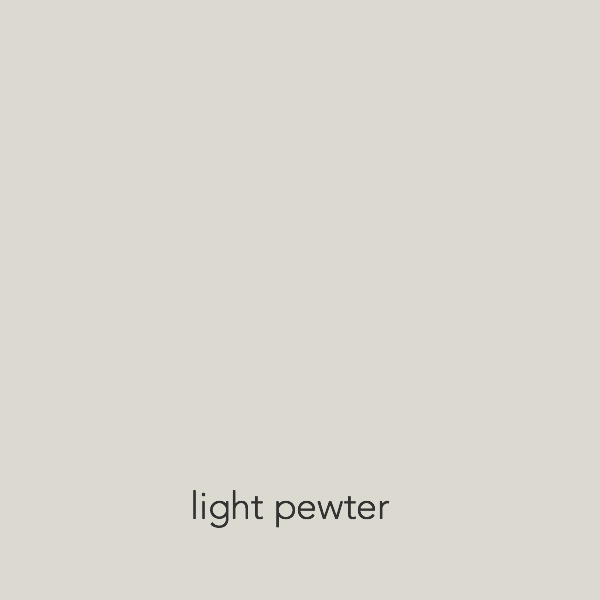 can look dark next to something lighter. 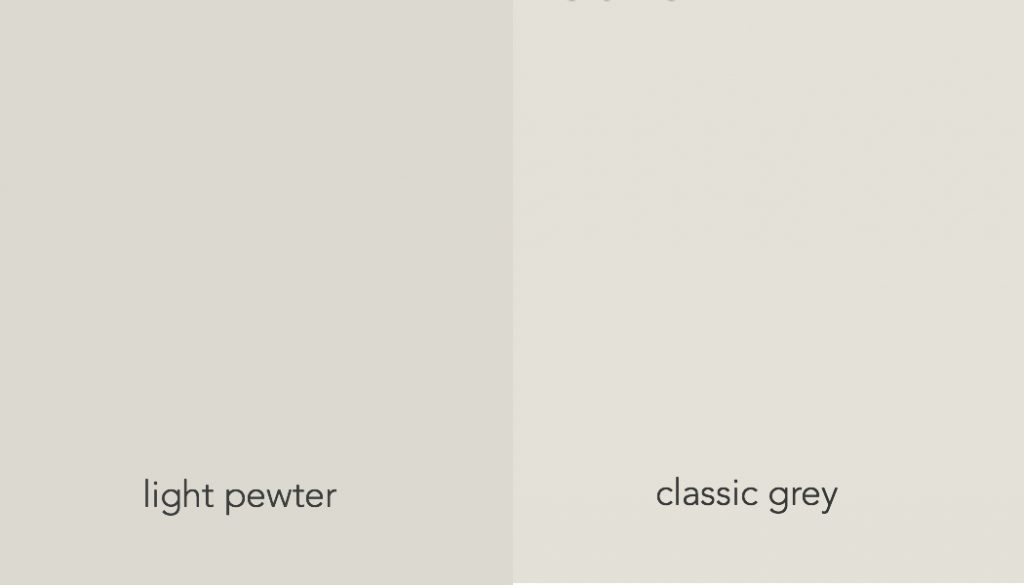 Another effect of simultaneous contrast.

And important to be aware of when placing neutrals together.

Two big words at once.

Il’l define each, then break down their roles.

Undertone describes what color is in the neutral.

(This can also be called hue—

hue, color, undertone, all mean about the same thing.

Undertone indicates that it is a color within the neutral. )

Saturation is how much of that hue, color, undertone is in the neutral.

This is where it get tricky.

Neutrals by their very nature are low saturation,

and modern chemistry can slice these undertones up

into infinitesimal amounts, proportions and combinations,

making it infuriatingly difficult to nail down what just undertones are present.

Why does it matter?

It matters because creating beautiful color relationships requires being able to see the differences in undertones.

Let me repeat that because the crux of working with neutrals hinges on that one idea.

But maybe you already knew that.

Maria Killam at Color Me Happy

has a color system devoted entirely to this subject.

I refer you to her for all your undertone questions as I make no claim to expertise.

I am sort of an explorer. Like Mssr. Chevrel, whom we met previously.

But we can begin with the basics,

According to Maria Killam, beige has 3 undertones: yellow, green or pink.

(You could say red instead of pink,

but so what, we’ll use her terminology.)

Below are three beiges in each of the undertones.

These are saturated with undertone, making it easy to see their differences.

Note all the beige undertones have a warm color in them which is why they tend to warmth.

Grey, also, has three undertones, according to Maria Killum:

Below are three greys in the three undertones.

These less saturated greys show how subtle the undertones can become.

Note that all of the undertones in grey have some amount of blue in them,

which is what makes them tend toward coolness.

Again, this refers to how much of the undertone is present in the neutral.

As I mentioned above, neutrals by their nature are low in saturation, but they do vary.

There can be little, 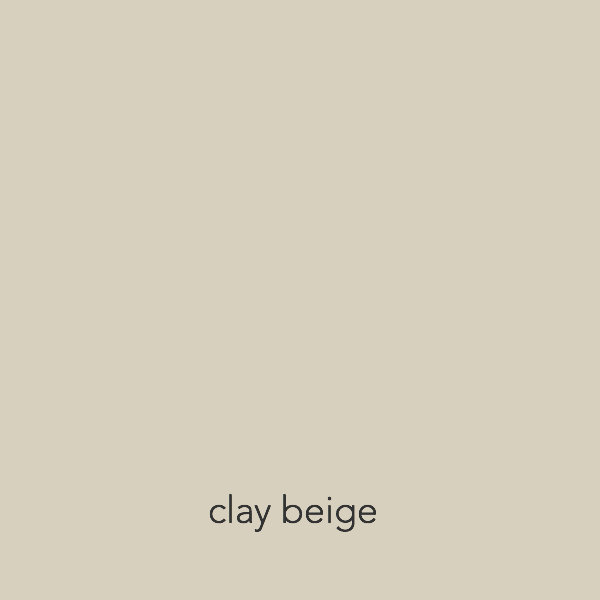 or there can be a lot, 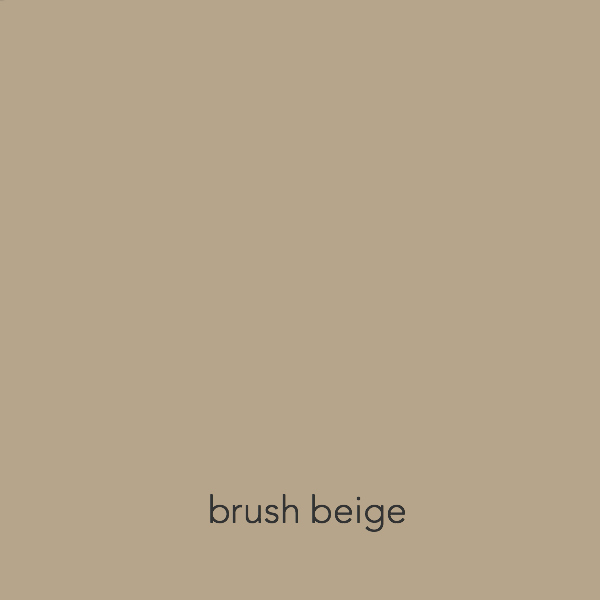 in which case the color can begin to leave the realm of neutrals and join the family of straight up color. 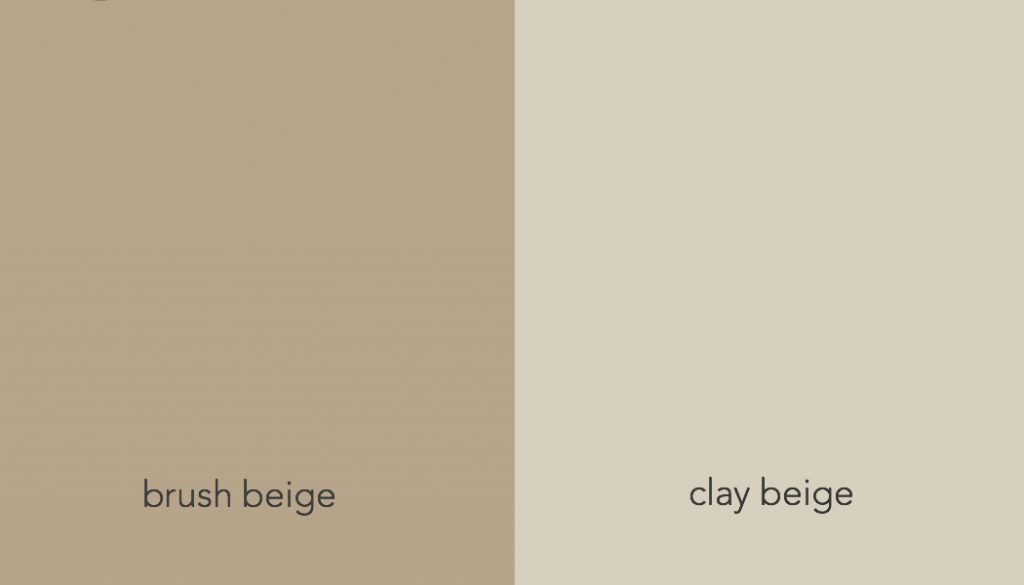 but next to a real brown, like Maryville, Brush Beige becomes a neutral again. 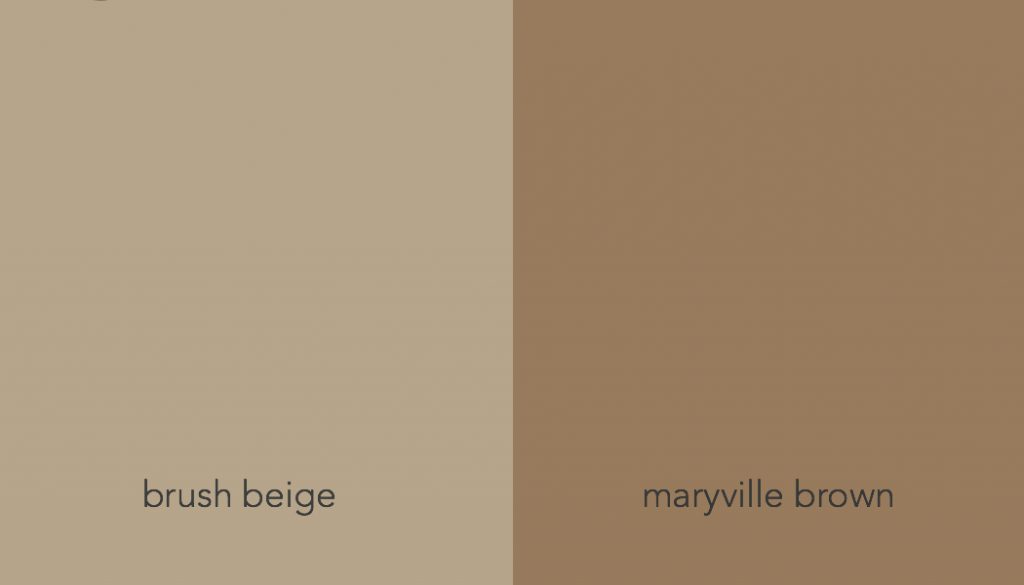 It takes a keen eye to work with these slippery neutrals

and that keen eye develops through training.

Let’s practice now while we are warm to the subject.

This fabric below is composed of four different neutrals.

I’ll describe each as I see it.

but someone’s got to get the ball rolling. 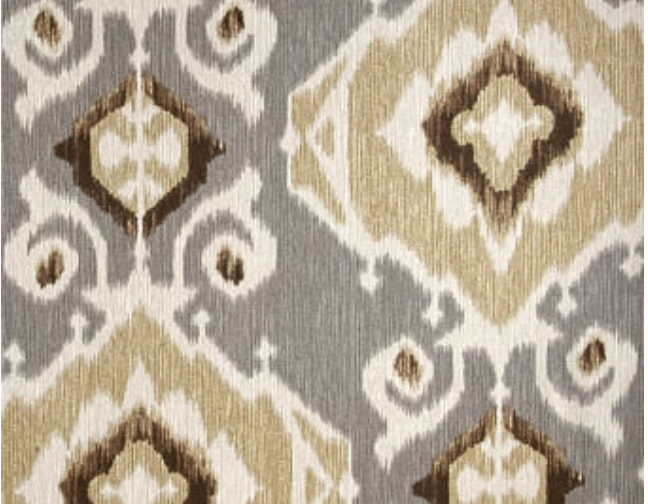 1. The background neutral is a mid-value grey with a violet undertone.

2. The diamond design is a mid-value beige with a yellow undertone.

3. There is a lighter beige with a pink undertone behind that one.

The take away for today

1. Neutrals run the gamut through

with infinite combinations of undertone and saturation levels.

2. If we want to work with neutrals and not go bonkers,

we need to get a grip on this wild, wild gamut.

3. We can train our eyes through practice.

Get a whole bunch of individual, neutral paint chips.

Thrown them down on a clear, flat surface and sort them out.

Start with the main categories

After these are sorted,

do an undertone sort for each of them–

greige…well I don’t know about the undertones for greige,

just do your best because they could

have any of the possible undertones in them.

You don’t have to be perfect.

of what you are looking at

and maybe you’ll figure out your own system

which would be great

to get yourself on sure footing.

When you are done reading this,

and want more of the nitty gritty of undertones …

She offers classes, both online and in person and

you will probably learn a lot from her.

Thanks for stopping by.